The world’s largest conclave for Yoga being Organised by India Exposition Mart Limited, Supported by IYA

Expected footfalls: About 1 lakh per day

Delegates: About 5000, on a first-cum-first-serve basis

These lines should be highlighted

It is the largest conclave, more of a carnival of Ayurveda, Yoga and Naturopathy that will include activities such as

These sessions will be public sessions and open to all; In all, the venue has multiple open and closed auditoria where a total of about 20000 people can do yogic postures

Where is the WAAYN being held?

Who can participate in WAAYN?

All IYA Members including Member Institutions, Associate Institutions, Life Members, Yoga Professionals and General Members may register for the WAAYN

Who is organising the WAAYN?

WAAYN is being organised by India Exposition Mart Limited

Since this is a one-of-its-kind event and allows for large-scale participation, you may invite members from your organisation living anywhere in India as also from around the world!

Now is the time to immediately send your expression of interest to block 200 to 500 seats for your alumni and make them part of the Guinness record gathering!

We request you to nominate one authorised representative from your organisation to communicate with IYA for the WAAYN! 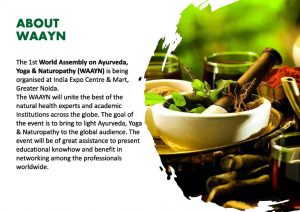