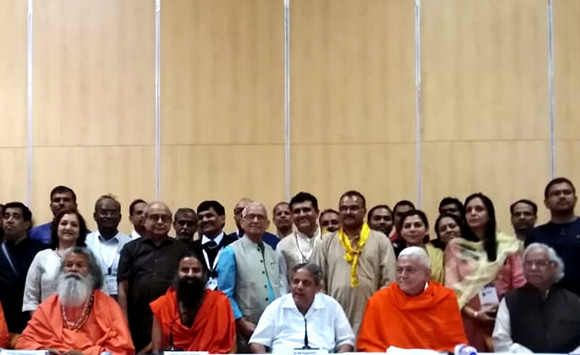 The 5th General Body meeting of IYA was held on November 9, 2019 at India Exposition Mart Ltd., Greater Noida. The meeting commenced with few conspicuous announcements by Yogrishi Swami Ramdev ji Maharaj, Chairperson, Governing Council. He informed that soon Yogasana Competitions will be recognized in Olympics as a sport while congratulating all Yoga fraternity on the move by GoI with the effort of AYUSH Ministry and EC members of IYA.

Guruji Dr. HR Nagendra, President, IYA welcomed Padmashree Swami Amrtasuryananda ji, Mahamandaleswar Swami Maheswarananda ji and Dr Raghavendra Rao who were the Special Invitees to the GBM.  He appreciated the efforts made by the association in the field of research, and good work by institutional and individual members.

He then discussed about prioritizing the steps to be taken for expediting the Integrated Cancer Project (ICAP) and Heart Diseases, and expansion of Niyantrita Madumeha Bharat (NMB) by State Committees. He highlighted the huge scope for Yogasana Competition and the need to extend IYA’s family. The association is aiming to reach the target of one lakh members by March 2020.